China’s acting ambassador to Israel caused a stir Sunday when he noted that China had let Jews into the country during the Holocaust and expressed hope that Israel would not close the door to his countrymen in the face of the spread of a deadly virus.

Israel, like other countries, has, over the past week, barred entry to arrivals from China. The measures came as the death toll from the Wuhan coronavirus topped 300, with over 14,000 infected, and the first death outside of China was reported in the Philippines.

In a press conference in Tel Aviv, acting ambassador Dai Yuming had said of the Israeli ban: “I feel bad and sad. Because it actually recalled [for] me, the old days, the old stories, that happened in World War II, the Holocaust.

“Many Jewish [people] were refused when they tried to seek assistance. Only very, very few countries opened their doors, one of them is China. I hope Israel will never close their door to the Chinese,” he said.

He was apparently referring to some 30,000 European Jews who between 1933 to 1941 escaped Nazi persecution by traveling to Shanghai, according to UN figures, citing the Simon Wiesenthal Center.

Dai further said China was taking control of the situation. He asserted that fear over the contagion was worse than the threat itself and called on countries to work together to stop the spread of the virus while also preventing overreactions.

The Chinese embassy to Israel clarified later that it never intended to compare Israel’s travel restrictions for Chinese travelers amid the coronavirus scare to the Holocaust.

“Regarding the press conference held today by the Chinese embassy in Israel, we would like to clarify that there was no intention whatsoever to compare the dark days of the Holocaust with the current situation and the efforts taken by the Israeli government to protect its citizens,” the Chinese embassy said in a statement conveyed by Israel’s Foreign Ministry.

“We would like to apologize if someone understood our message the wrong way,” it said. 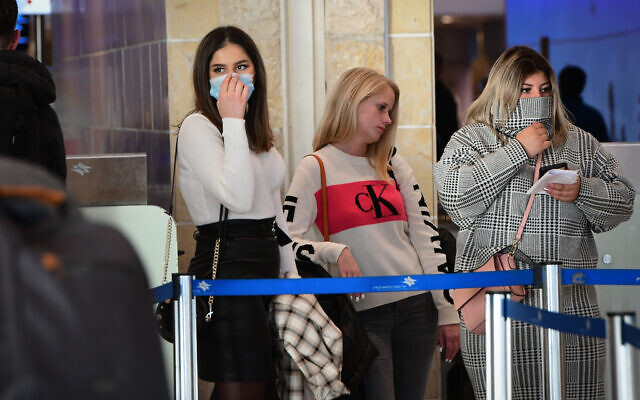 Israel on Sunday toughened its actions to prevent the arrival of the coronavirus to the country, with the Health Ministry calling on anyone who has recently returned from China to stay at home for a period of 14 days. Israel has halted flights from China and toughened border restrictions over fears the new virus could spread to the Jewish state. The Interior Ministry last week banned entry to anyone who was in China in the past few weeks and is not an Israeli citizen.

As a result of the restrictions, some 1,500 Chinese tourists already in the country are now stranded in Israel, most of then confined to their hotel rooms, Channel 12 news reported Sunday.

Some of the tourists are hoping to return to home in the coming days by catching connecting flights from Israel to other countries that are still flying to China.

The Foreign Ministry on Friday recommended that Israelis not travel to China until the emergency is declared over and that those in China consider leaving the country.

Since emerging from the central Chinese city of Wuhan late last year, the coronavirus has infected over 14,000 people across China and spread to 24 countries. 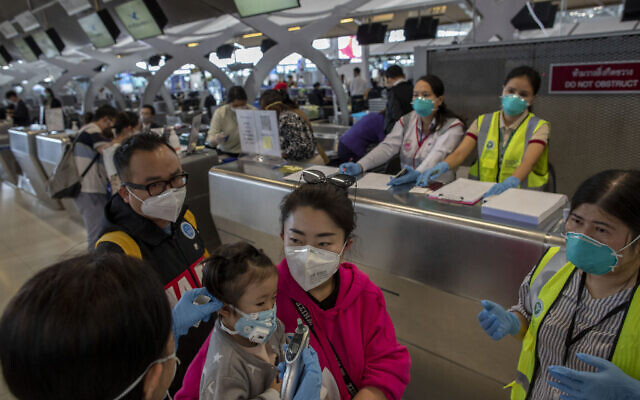 A health worker reaches to check the temperature of a tourist from Wuhan, China, as they line for a charter flight back to Wuhan at the Suvarnabhumi airport, Bangkok, Thailand, January 31, 2020. (AP/Gemunu Amarasinghe)

China has locked down Wuhan and surrounding cities in a bid to contain the virus, but it has continued to spread, prompting more cities to impose similar draconian measures.

The World Health Organization has declared the outbreak a global emergency and has warned that governments need to prepare for “domestic outbreak control” if the disease spreads in their countries.

Nations have taken extraordinary measures to build virtual fortresses against the disease. In addition to Israel, the United States, Australia, and New Zealand also banned foreign nationals from visiting if they had been in China recently, and warned their own citizens against traveling there.

Mongolia, Russia and Nepal closed their land borders, while Papua New Guinea went as far as to ban anyone arriving from ports or airports across Asia.

The containment measures may have slowed the spread of the virus, but not stopped it. Britain, Russia and Sweden this weekend confirmed their first infections.